How to change the world

reflections on Marx and Marxism

“The ideas of capitalism’s most vigorous and eloquent enemy have been enlightening in every era, the author contends, and our current historical situation of free-market extremes suggests that reading Marx may be more important now than ever. Hobsbawm begins with a consideration of how we should think about Marxism in the post-communist era, observing that the features we most associate with Soviet and related regimes–command economies, intrusive bureaucratic structures, and an economic and political condition of permanent was–are neither derived from Marx’s ideas nor unique to socialist states. Further chapters discuss pre-Marxian socialists and Marx’s radical break with them, Marx’s political milieu, and the influence of his writings on the anti-fascist decades, the Cold War, and the post–Cold War period. Sweeping, provocative, and full of brilliant insights, How to Change the World challenges us to reconsider Marx and reassess his significance in the history of ideas.” –Publisher’s website.

The Marxist concept of value is very frequently equated, whether explicitly or merely tacitly, with the corresponding Ricardian concept of “labour expended”. This paper argues that unlike the Ricardian theory of value, the Marxist theory of value is a monetary theory. In the Marxist system, the value of a commodity is expressed not through itself but through its distorted forms of appearance, in prices. Moreover, it cannot be defined in isolation, but exclusively in relation to all other commodities, in a process of exchange. In this relation of exchange value is materialised in money. The essential feature of the “market economy” (of capitalism) is thus not simply commodity exchange but monetary circulation and money. Commodity exchange presupposes thus the (positive) prices of all commodities involved. In other words, prices are not determined after the establishment of a non-monetary equilibrium system of barter between “production sectors”, like the Sraffian “linear production systems”. On the contrary, barter is for Marx non-existing, as all exchange transactions are made up of separate acts of exchange of commodities with money. 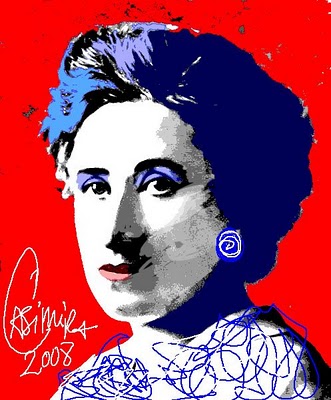 We are writing to ask you to assist us in the effort to publish the Complete Works of Rosa Luxemburg, which will bring the contributions of one of the most creative thinkers and activists of modern radicalism alive for our times.

The 14-volume Complete Works will contain everything Luxemburg ever wrote—all of her books, essays, pamphlets, essays, articles, letters, and manuscripts. Most of these writings—as much as 80 per cent—have never before appeared in English, and some will be published for the first time anywhere. New English translations will be provided for her works that have been published previously.

The project is being published by Verso Books with the support of the Rosa Luxemburg Foundation (RLS) in Berlin. Although the RLS has provided important assistance, it cannot provide the full cost of translation and editing. We are therefore appealing to you to help us obtain additional funding to bring this project to fruition.

We urgently need $30,000 to fund the next volume in the series (so far we have raised $19,000 towards that goal). Tax-deductible donations can be sent to the newly-established Toledo Translation Fund—named after the twelfth- and thirteenth- century school of translators renowned for its translations from Arabic, Greek and Hebrew texts that helped pave the way for the Renaissance. All funds sent to the Toledo Fund for this project will be exclusively used to cover the cost of translating and publishing The Complete Works of Rosa Luxemburg.

We have so far issued (in 2011) a companion volume, The Letters of Rosa Luxemburg, which is the most comprehensive English-language collection of her letters ever published. It received widespread acclaim in such publications as The London Review of Books, The Nation, Atlantic Monthly, The Guardian, and Book Forum. In early 2012 the first volme of the Complete Works will appear, entitled Economic Writings I. It will contain the first full English translation of one of her most important books, Introduction to Political Economy, as well as eight recently discovered manuscripts on the history of ancient, medieval, and early modern societies, Marx’s Capital, and the causes and consequences of capitalist crises.

You can make a contribution by going directly to www.toledotranslationfund.org and filling out the online form for donations to The Complete Works of Rosa Luxemburg. Your help will be deeply appreciated!

If you are not in the position to contribute financially, we hope you can still collaborate in the project by working on translation, editing, and helping to publicize the forthcoming volumes in the series. We also hope that you can forward this message to others who may be interested in the project.